Before finding mediator in Manchester you must know some basic things about the mediators and their services. Brief information in this regard is provided in this write-up for your consideration.

What is a mediator?

A mediator is neither a therapist nor a counsellor as he does not help in resolving relationship as well as emotional issues caused by the separation of two lifetime partners through divorce. In fact mediators are trained professionals who know how to resolve the disputes between the couples on the basis of their knowledge and experience. They work like a football referee who does not take side of any of the teams and makes decisions impartially. Main aim of the mediator is to cover the major issues, including the issues of finance and children, between the divorcing couples and make them ready for a mutual agreement. This process can long or short time to complete depending upon the severity of the issues between the separating couples and their attitude to resolve them. One needs mediator for following reasons.

Managing the consequences of divorce

The separation or divorce is a very stressful activity which cannot be managed easily by the two separating partners themselves. According to experts separation from a lifetime partner can make one’s life stressful as it not only disturbs their personal and social life but also certainly affects their finances and the life of their children and the other members of their family.

There are certain issues that have to be resolved as soon as possible like the terms of custody and contact with the children etc. Along with it they have to resolve their financial issues also like division of their movable and immovable properties like home, financial documents and earnings etc. The consequences of divorce affect not only the current earning of both the partners but also affect the financial considerations of the rest of their family. In such condition it becomes necessary to find a mediator in Manchester to make the process of divorce relatively easier and less traumatic for both the parties by resolving all the issues between them.

Alternative resolution of the disputes

Most people first of all try to take legal action in such troubled situation. They usually contact lawyers and solicitors in this regard but their intervention in divorce cases usually becomes harmful instead of being beneficial for both the departing parties. They usually take the process in adverse direction which can make the case more complicated. In this way the divorcing couple has to bear heavy cost of legal proceedings along with many small unresolved issues that become big with time. In such situation they have to search for an alternative arrangement. They have either to find out alternative resolution of their disputes or contact a mediator instead of lawyers from the very beginning.

Thus an experienced and trained mediator in Manchester can help you in understanding all the possible resolutions for your disputes along with helping you in making your divorce easy and fast by resolving all the issues between you both. 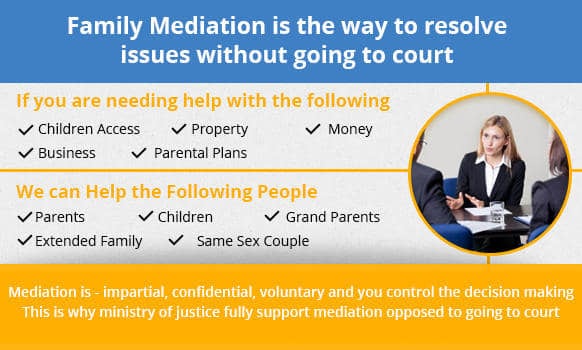 Having people to talk to

It is essential to rely on the process at a time when sensations may be hurt and trust has been broken. Mediation does work, but the procedure needs to be given time, and compromises will most likely have to be made on both sides. It is typically hard to consider the big picture at a time when feelings are running high, with any pulling back viewed as ‘ giving up‘ or being weak: this is where mediation can form a buffer between the parties.

How does mediation work in manchester